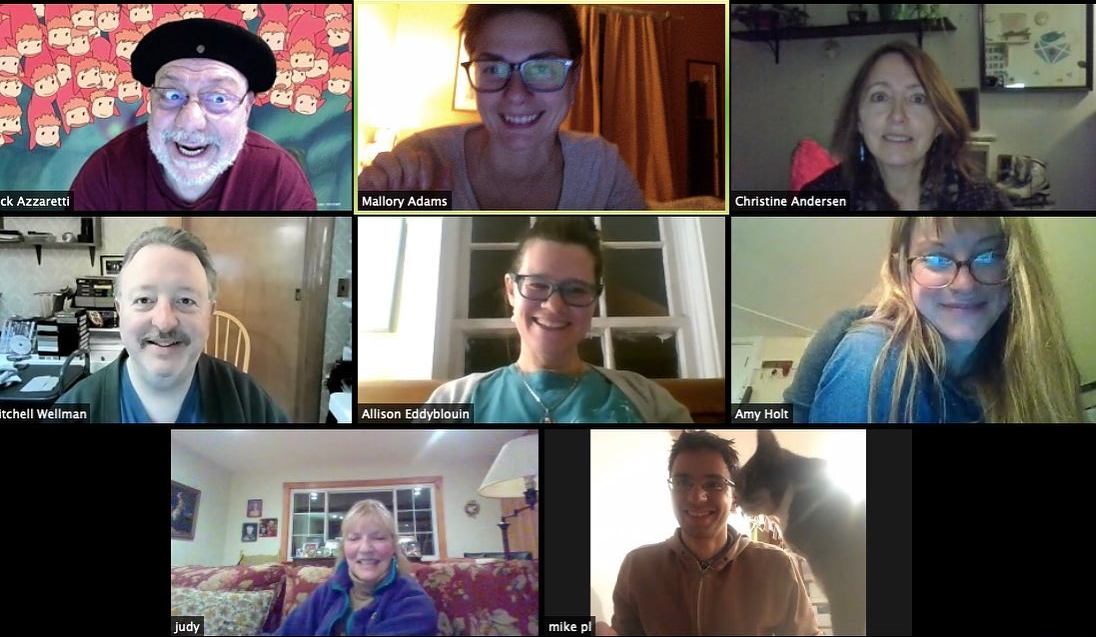 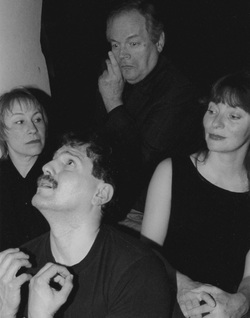 No Exit by Jean Paul Sartre 1998
In 1993,  Jean Paul Sartre's No Exit was staged at Round Top’s Gallery Theatre in Damariscotta, Maine and made the Portland (ME) Sunday Telegram’s Top Ten List of all shows produced in Maine that year.  Five years later,  an acclaimed revival of  No Exit  was produced in the sparse board room of Damariscotta's Mobius Community Center with three of the original four actors: Charles Waterman, Andrea Handel, and Ellen Erickson, with the additional talents of Tom Handel. By this time, the four were working under a new name honoring the Damariscotta River, which flows near all of the company’s performance spaces. River Company was born.

In River Company's first year, Charles Waterman designed a logo, a board was formed, and the actors and director pooled personal funds to produce shows. Before long, however, Waterman paid everyone back and even included small shares from ticket sales. The company’s 2nd production was Albee’s The American Dream, which cleared all of $300 for the fledgling group.

In 1999, River Company was incorporated as a nonprofit 501(c)(3), and a slate of officers was elected:  Waterman as President, Ellen Erickson as Secretary, Andrea Handel as Treasurer, and Tom Handel as Vice-President. A mission was crafted, based on the group's universal philosophy: to produce dynamic, minimal-style theatre written by major playwrights with a focus on acting.  The first venue was the Community Center’s boardroom in Damariscotta.

Eventually, Waterman invited another local professional actress, Ann Foskett, to become involved. In 2001, she directed a tremendously successful Talking With  (revived in  2010), casting 9 of the area’s best actresses, all of whom agreed to donate their pay to River Company.  By this time, a loyal audience was forming, and a letter soliciting members was sent out. A list of the 38 Charter Members is still published each year in the program.

As the company gained recognition for their high quality drama and comedy, a following grew, and River Company needed to find a larger downtown space.  The company chose the Porter Meeting Hall at Skidompha Library as the perfect venue for its intimate productions.  Some shows were even “taken on the road”  and presented at the independent retirement community, Schooner Cove, or at Round Top's Darrows Barn.

Recently, River Company has performed a Christmas show every December and donated all the proceeds from ticket sales to several other local non profits including: the Newcastle Ecumenical Food Pantry, CLC YMCA, New Hope for Women, the Community Energy Fund of Lincoln County, ElderCare Network of Lincoln County and Spectrum Generation's Meals on Wheels.

Today, River Company continues to offer their "dynamic, minimal-style theatre" to the audiences of midcoast Maine. After 20 years, they have developed a loyal following, who keep filling Porter Hall with laughter and tears season after season.
River Company is a non-profit, 501(c)(3) corporation. Our Mission: River Company provides a local arena for artists to gain theatrical experience that fosters artistic growth.  River Company’s work reflects and entertains its community through its creativity, flexibility, and versatility.
Donate Now